Announcing Bugs and Bacon for Android (and a free iOS version)!

Last October, Cyclone Kick Studio launched not one, but two new games. Of course, the one almost everyone would remember is Fight on State. Unfortunately, FOS's success left the other game, Bugs and Bacon, in the dust.

I blame myself for this. I worked on Bugs and Bacon for about 3 months over the previous summer before starting Fight on State. Although it was nearly finished as development on FOS began, I couldn't be bothered to divert any focus away from FOS (other than, you know, for student teaching and Blue Band).

I still wanted Bugs and Bacon to be released before FOS, so I managed to put the rest of it together. Make no mistake, I did not release it until it met the level of quality I expected. The problem was that I basically did nothing to promote it at all. I'm willing to bet that, on the day Bugs and Bacon launched, I was more focused on putting the final touches on FOS.

Well, two weeks ago, I decided to make things right (hopefully) by porting the game to Android, where it would hopefully get the attention I thought deserved. From everything I read, I noticed that paid games–to be blunt–pretty much disappear amidst the free games in the Android marketplaces, so I took a different approach to this version. 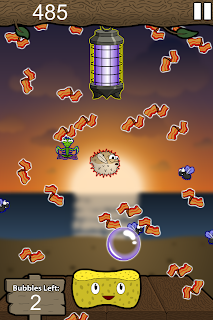 The initial download of Bugs and Bacon for Android will be free. After you obtain 5 of the 10 unlockables, you will be asked to pay $0.99 for access to the other 5. While I'm still not very comfortable with using in-app purchases, this seems to be more of a benefit for the player; instead of paying $0.99 up front like on iOS, anyone can download the game and play this version for free, spending that same amount only if they are enjoying it (or just keep playing without the other unlockables).

Speaking of iOS, it wasn't too difficult to create a new version of it, which I'm calling Bugs and Bacon Free, that I just submitted for approval. It will work exactly the same way as the Android version and is not meant to replace the paid version, for those few of you who already bought that. 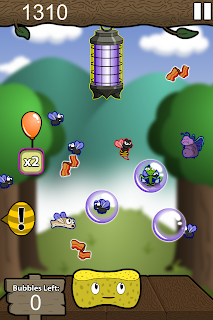 I made a few changes to this new version of Bugs and Bacon, such as adding two new backgrounds and 12 Game Center achievement on the iOS version, but the core gameplay is basically unchanged. Click here if you'd like to read about that.

Assuming everything goes smoothly, I'm planning to release the new version of Bugs and Bacon for both iOS and Android very soon, just waiting Apple's approval of the iOS version. I'm very much looking forward to seeing what more people think of it!
Posted by Max at 11:42 AM