Play it now on:

iPhone and iPod Touch: Beast Squad is available on the iTunes App Store for $0.99. It contains 15 more levels than the browser version of the game.

Browser: Beast Squad is also available to play for free online. You can play it on Newgrounds or Kongregate now!

Beast Squad is a single-player 2D game that will be available for iOS and Android devices later this summer, along with a modified browser version for those who want to give it a quick try. The objective of each level is to get your beast from the left side of the stage to the right while avoiding all of the obstacles (like thorny vines, projectile-spitting plants, and hovering spikes) in your way.

Simple enough? Of course not. Once your beast starts moving, you will only have a limited amount of control over it (depending on which beast you are using), so before that, you must strategically place trampolines throughout the stage. These tools will let you bounce around the obstacles standing between you and your goal. 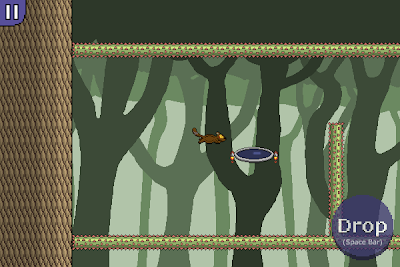 Since the slightest touch with any of the obstacles will defeat your beast, the levels themselves are relatively small, which I found greatly reduces the frustration of death. The player will be able to quickly retry from the beginning of the level without any further punishment (i.e, there is no limited number of lives, and all of your trampolines stay right where you left them).

Of course, skilled players will be rewarded as well. After completing a level, the player will be given a rank of A, B, or C based on the number of trampolines used and the number of berries scattered around the stage that were collected. Fewer tools and more berries lead to better ranks.