Get Bugs and Bacon on:

Many of my favorite iOS games are the "simple" score-centric types (like Jetpack Joyride and Ziggurat) that I can quickly play during short waits. Bonus points go to games you can play with one hand in portrait mode so other people think you're just checking your mail. Those kinds of games (and my limited amount of time between college semesters) inspired me to develop a game with a similar mentality, albeit one with a unique premise. I present to you:

Bugs and Bacon is a game about taking risks. Your goal is to capture as many bugs as possible inside of bubbles and direct those bubbles (using swipe controls) into a bug zapper to score points. You have a limited number of bubbles, so you'll need to grab as many bugs as you can with each. However, one touch of a bee's stinger (or a number of other obstacles) will pop your bubble, and you'll watch as all your captured bugs fly away!

As you play, you will begin to account for your own limitations. How many bees can I avoid at one time? Should I risk everything to grab one more bug? 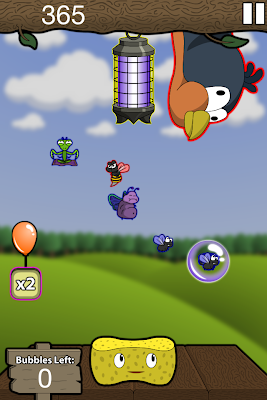 Okay, so you're probably wondering, "What about the bacon?"

The "bacon" part of the title is the other way you can score points. While you are maneuvering your bubbles around the screen, strips of bacon will fall from the sky. You can touch them to score some extra points (or capture them in your bubble to be zapped).

This circles back to the whole "risk-taking" aspect of the game. You could simply think of the bacon as a distraction and ignore it—or you could go out of your way to grab every single strip to give your score that extra little boost it needs.

Plus, you're rewarded with a very satisfying sizzle when you touch them. Just saying. 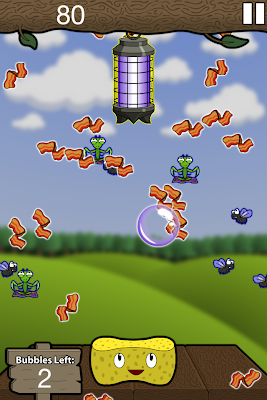 So now you might be thinking, "Why does bacon fall from the sky? That's crazy!" To that I reply, "Why, yes. Yes it is."

One of my main design decisions for this game was to include any ideas that I thought would make it more enjoyable, no matter how crazy or stupid they sounded. In fact, the more crazy or stupid, the better.

This led me to create some interesting bugs for the player to capture, like a praying mantis on a flying carpet that can teleport away if a bubble gets too close. Additionally, there is a handful of power-ups you can use to improve your score.

I'm particularly proud of the "Disco Fever" power-up that replaces the bug zapper with a disco ball. It also prevents bees from appearing for a while, since bees are terrified of disco music. Obviously. 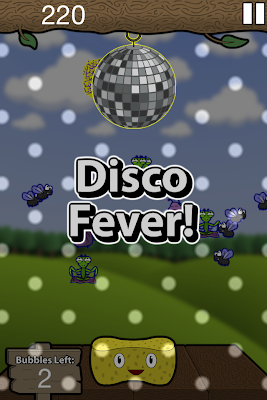 There is so much more that I could say about this game, such as explaining all of the unlockable bugs and power-ups or how many stats the game will keep track of, but I'lll save that for later. Look for Bugs and Bacon on the app store within the next few weeks for $0.99. (Update: A free version of Bugs and Bacon is now available for both iOS and Android devices. See the links at the top of the page to try the game out right now!)

I'd love to discuss any questions, comments, or suggestions you might have! You can leave a reply here, hit me up on Twitter @mgbesong, or email me at max@cyclonekick.com.