It's been a crazy couple weeks since my last post, and I haven't been able to work on Bugs and Bacon as much as I would have liked in that time. That being said, I managed to cut the amount of memory the game uses while playing by 2/3, which feels like enough of an accomplishment for that amount of time. It's running at a smooth 60 frames per second at all times on my iPhone 4S, and my friends testing it on their devices are also pleased.

Just about the last thing left to do now is implement Game Center support, which I'm trying to figure out for the first time. I hope to finish soon, as the fall semester has almost caught up to me. I'll be student teaching at a nearby high school along with playing in the Blue Band, so my schedule is about to get pretty hectic for the next few months. However, I won't be ignoring game development the whole time, as I hope it will help me keep my sanity as the pressures of life arise. (These experiences are supposed to build character, right?)
Posted by Max at 6:05 AM 1 comments

I'm trying to make sure I keep this blog regularly updated now that I've revealed Bugs and Bacon, so now would be a good time to show off the app icon that will be representing it. It's the Zen Mantis (one of the bugs you will be capturing) behind a backdrop of bacon. 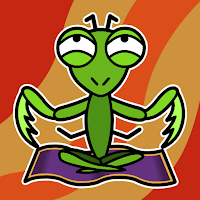 I think it does a good job of summing up the game, or at least the game's title. Let me know what you think or if you have any suggestions for how to improve it. I know some games can become successful despite terrible icons (or maybe some are so bad that they add to the games' successes), but I want to do everything in my power to to make my game as attractive as possible. I've read many articles about the iOS gaming space, and quite a few state that a good app icon can mean the difference between someone checking out a game versus passing it over.
Posted by Max at 3:20 PM 0 comments