It's only been a few weeks since I released Bugs and Bacon, but there's another game I've been working on for the past couple months... and it's going to be released this Wednesday, October 24!


Fight on State is a game based on the Penn State Blue Band, which I have been a member of for almost 5 years now. I was showing Bugs and Bacon off to fellow trumpet Becky Guldin, who suggested that it would really cool if there was a game about the Blue Band and tossed out the idea of the drum major running through the band at the beginning of pregame.

We laughed about such a crazy idea... then I went home and built a prototype in just a couple days.

As soon as I showed her what I put together (using a stripped-down version of the code behind Bugs and Bacon), I knew we were onto something special. This was confirmed when we showed the prototype to Dr. Bundy. I've never seen him giggle like that, especially when he saw the drum major's flip (and yes, "giggle" is the best word to describe it).

I built the prototype as a see-what-I-can-do kind of thing, but then things started to get serious. I redrew all of the graphics (maybe I'll post a before/after comparison later) as well as a ton more and began to flesh the game out. I've never worked so hard on a game before, and this was happening as I was student teaching and marching in the Blue Band!

We added more features, like a whiteout round and a feature twirler minigame. The ability to get a speed boost from music notes to plow through the football players was also a very late addition, but probably my favorite part.

We decided to release the game for free, and Becky had the brilliant idea of putting THON donation links in it, so I hope the game has a positive impact on the world. This is really the most important game I've ever had the chance to work on, in more ways than one.

I'm still floored by the number of people who are excitedly anticipating the game's release, made obvious by how quickly its Facebook page has grown--all thanks to Becky's incredible PR work. She's not taking nearly enough credit for what she has done for this game, so if you see her, give her a big high-five.

Well, that's about it for now. I've never been so excited to launch a game, but the time is almost here! 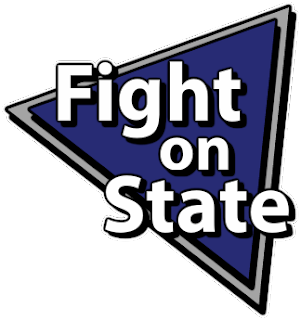 You can zap bugs and grab bacon on you iDevices now!

Now I have to go teach some algebra and march in a parade. What a crazy day!
Posted by Max at 3:49 AM 0 comments

Apple just approved Bugs and Bacon, and it will be released tomorrow, October 5th! (Only a day late, but who's counting?)