Almost two years ago, I was casually browsing Amazon and saw that they had some ukuleles on sale. I wrote something about it on Facebook, and one of my friends encouraged me to get it--"It will change your life."

So I got one… and of course I was really bad at it, though I had a lot of fun passing it around with friends during a Blue Band bowl trip and a few other get-togethers.

About a year later, I got an iPad and, naturally, my first thought was, "So what kind of app am I going to make for it?" It didn't take me long to imagine holding the iPad like a ukulele and using its multi-touch gestures to play it; it made perfect sense! Plus, maybe I could use it to get better at playing the real instrument! 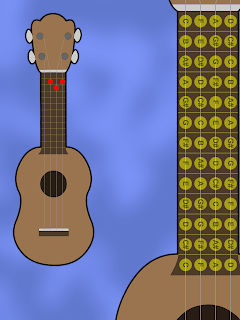 A screenshot from a week into development

Now at the time, I thought of this as just one of those dumb little ideas to tinker around with. But after getting it working, I showed it to the same friend who encouraged me to get a real ukulele--and she thought it was great! I knew if anyone liked it, it would be her, but I was inspired to turn this into a real "thing" all the same.

With her help, we even got one of the greatest ukulele player in the world (and also the nicest person you could ever meet) to try it out. After attending one of his concerts, he chatted with us and suggested ways we could improve the app.

I could have never predicted something that awesome would have ever happened when I started working on that "dumb little idea" months before!

It's been a few months since then, and lots of improvements have been made. It's a relief to finally release Uketility for everyone to try, and I can't wait to see what people think of it!
Posted by Max at 2:25 PM